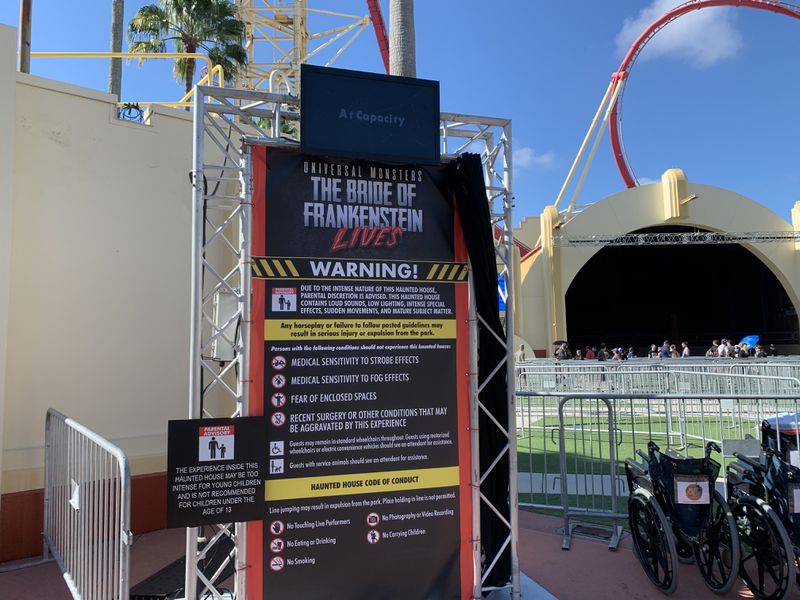 On Friday the two houses “The Bride of Frankenstein Lives” and “Revenge of the Tooth Fairy” were open for Pass holder preview access with reservations. These pass holders were able to make reservations for this event starting as early as last Wednesday. Universal had also opened an alcoholic drink walk through bar, trick-or-treat at Island’s of Adventure, and a themed-skeleton scavenger hunt! There is a wide variety of activities for everyone whether you enjoy candy or simply just the Universal atmosphere!

When Saturday and Sunday had rolled around it was not surprising what happened when the houses were officially open to the public. There were long lines waiting outside of Universal upon opening, wrapped all the way around the parking garage. When Universal opened their gates early in the morning, everyone had rushed straight to the 2 houses, and the Tribute Store! It was a NIGHTMARE!!! And you can probably already assume that when it was only around 9:30am… the haunted houses were at capacity. But instead of focusing on just the negative, let’s move on to the other fun activities!

Guests having a good time at Universal also have the option of going around the park scavenger hunting for specific themed skeletons hidden around the park. Many skeletons are hidden in stores, attractions, and in detailed displays. Watch out these skeletons really blend in! Let’s not forget! If you have children ages 10 and younger you can even head on down to Islands of Adventure to experience Trick-or-Treating in your favorite costumes!

I hope you enjoyed today’s blog and have a spooktacular rest of your day!