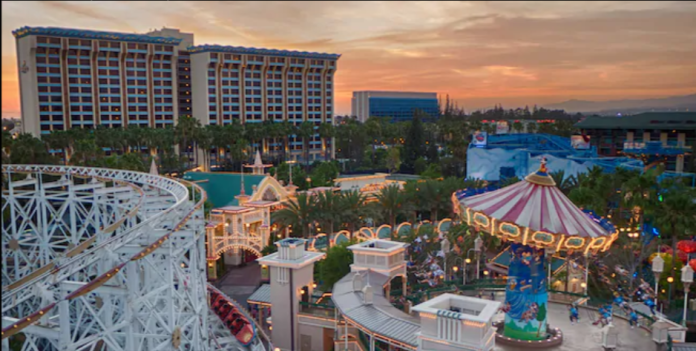 Prior to becoming Pixar Pier at Disney’s California Adventure park, this section of the theme park used to be called Paradise Pier. This land was themed to a Californian beachfront boardwalk, with attractions based on carnivals and the Californian culture. This land also had a local hotel, Disney’s Paradise Pier Hotel, located nearby that never got rethemed many years ago, but that is all about to change.

Disney announced, that Disney’s Paradise Pier Hotel, one of the three hotels on the Disneyland property in California, is getting a Pixar-themed makeover. This announcement was shocking, as its one of the first major hotel rethemes announced for Disneyland in a while!

Located on the outskirts of Pixar Pier at Disney’s California Adventure theme park, the hotel is currently themed to a Californian beachfront boardwalk.

The hotel’s transformation is set to “begin soon,” displaying Pixar’s artistry as a comfortable setting for all guests to enjoy. Similar to Disney’s Hotel New York – The Art of Marvel, the newly designed hotel will feature art inspired by Pixar’s most popular films, characters and icons!

The hotel doesn’t have a set reopening date quite yet, but it is expected to reopen to resort guests in 2023.

As more details are revealed about this new re-theme, I will let you all know as soon as possible! If you enjoyed today’s blog, please follow me on Instagram @mattsworldofentertainment and Twitter @mattsworldofet. As always, thanks for reading and I hope to see you all real soon!