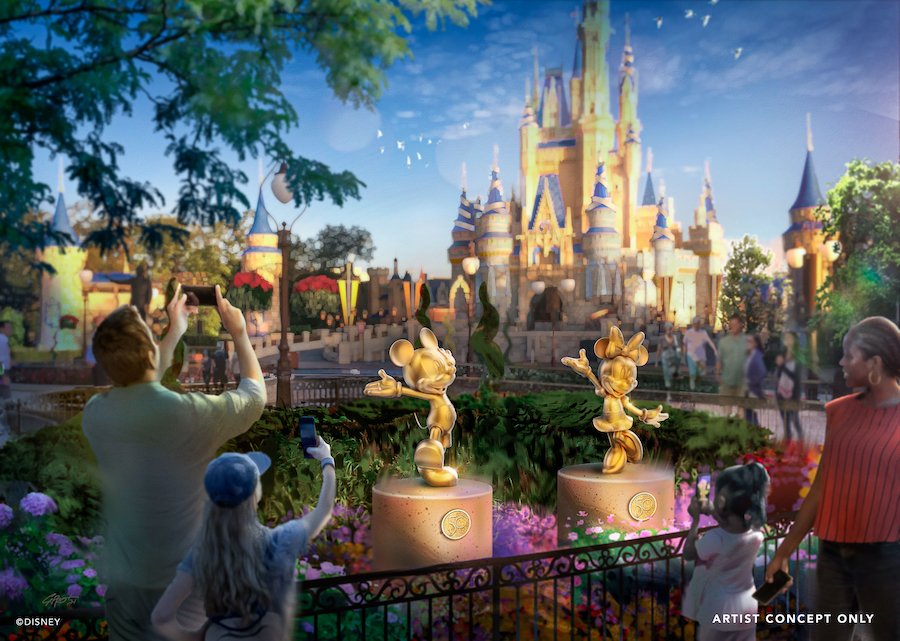 With the “World’s Most Magical Celebration”, Walt Disney World’s 50th Anniversary, only months away construction, refurbishments, and re-decorating in some areas of the resort are finally coming to an end.

It’s been a few crazy years but things are starting to look a bit better now with the EPCOT Transformation attractions finally having some opening dates announced, and Disney’s plan for the 50th anniversary’s entertainment seems to still be moving forward as of right now.

The EARidescence lights for parks icons have been installed, the Cinderella Castle has been decorated, mascot costumes have been announced and a special 50th anniversary fireworks show will temporarily take over the existing “Happily Ever After” fireworks show over at Magic Kingdom. However, there is still one more 50th anniversary change coming soon and that is the special “Fab 50 Character Collection” statues of Mickey Mouse and his friends.

These “Fab 50 collection” golden statues of Mickey Mouse, his friends, and other Disney/Pixar characters will feature the 50th anniversary logo design on the front, and will temporarily be scattered around all four parks most notably – the Magic Kingdom park. They are expected to be added throughout the month of August and early September.

In the comments below, what characters do you wish to see as “Fab 50” statues around the Disney Parks at the Walt Disney World Resort? If you would like to stay up-to-date with the latest entertainment you can follow me on Instagram @worldtravelwithmatt and Twitter @mattsworldofet. Have a great day and I will see you all real soon!